WHO FCTC Article 5.3 guideline recommendation 7.1 states that “Parties should not grant incentives, privileges or benefits to the tobacco industry to establish or run their businesses.”[1] One of the ways the tobacco industry benefits from the government is when their request for longer timeframe for implementation or postponement of tobacco control measures are accommodated. The following are examples documented from countries in ASEAN:

In January 2017, six months after the sub-decree requiring graphic warnings[2] on all cigarette packs went into effect, the Health Minister issued a second warning to tobacco companies for not complying with the regulations, threatening to take legal action. When tobacco companies were unable to get any more extensions, they simply don’t comply with the law.[3]

In May 2017, the head of the Health Ministry’s tobacco and health office, admitted that some tobacco companies have not yet complied with the sub-decree, while others had from 20 to 90% implementation.[4]

By 2019, while there has been some progress in PHW compliance, approximately 29% of cigarette packs sold in the market still do not carry PHW as determined by the sub-decree.[5]

To date, the adoption of the Joint Prakas between the Ministry of Finance and Ministry of Health on how to implement the penalty (fine) has been delayed for more than two years.

Towards the end of year 2018, the Ministry of Finance cancelled the scheduled tax increase that will take effect in 2019 and revoked the tobacco excise tier simplification roadmap under Regulation No. 156/2018 after coming under pressure from the tobacco industry.

The Coordinating Minister on Economy also withheld the Ministry of Trade’s regulation on tobacco leaf importation restrictions due to strong opposition from tobacco farmers, clove associations, and Parliament.

At the local level, the District Head of Jombang in East Java Province postponed the implementation of its smoke-free regulation since the tobacco industry is still considered an economic stakeholder and remains a protected domestic industry.

The Mayor of the City of Bogor also postponed to implement their smoke-free regulation with provisions on banning tobacco advertisement following protests not only from the Institute for Development of Economics and Finance (INDEF)[7] and other front groups but from government officials as well. Representatives of the Ministry of Home Affairs and Ministry of Law and Human Rights called the local government’s attention to reconcile Bogor’s local policy with the national regulation (Government Regulation (PP) 109), while a member of Parliament made a special warning for local regulations “not to hamper the growth of the tobacco industry business”.

The implementation of PHW was delayed by 180 days (6 months) – due to industry interference. The tobacco industry argued against it, citing that “they had a large stockpile of printed packets” and even requested a reduction in the size of the graphic image from 75 % to 50 %.

In February 2016, the MOH announced they will start preparation on plain packaging of cigarettes. The statements suggested that the ministry had an implementation plan and strategy for plain packaging. The tobacco industry and lobby groups cautioned the government through statements in the media that introducing plain packaging would violate international trade laws. The MOH back-tracked on its decision,[9] the Health Minister claimed they want to talk to the tobacco companies on intellectual property rights.[10]

In 2018, Institute for Democracy and Economic Affairs  (IDEAS), funded by PMI and JTI, ran newspaper articles opposing plain packaging, claiming it did not bring smoking down in Australia but instead curbed decline in smoking and that it was five years of failure,[11],[12] The plan has since been put on hold.

For the second and third year of pictorial health warning implementation, the second picture should appear on the cigarette packs from 2017 December to 2018 November 30th and the third picture should appear on tobacco products from 2018 December to November 30th 2019. To date, not all the tobacco products carry the required pictures and old pictures on packs can still be found in the market. No government action is found to have been taken.

In August 2018, the Ministry of Finance granted the request of tobacco farmers associations to postpone raising the excise tax from 20% to 40%, scheduled to take effect in October 2019 to October 2021 in order to reduce the burden on the tobacco industry.[14]

In 2018, while Vietnam Tobacco Association gave recommendations to the Ministry of Finance to consider temporarily suspending plans to increase tobacco excise tax, the government went ahead as scheduled to increase tobacco tax effective since January 2019.[15],[16]

Legal action is one of tactics that tobacco industry uses for delaying and undermining tobacco control policies. Following table showed the detail and number of litigation strategies of tobacco industry in ASEAN.

Tobacco taxes and pricing measures are recognized as one of the most effective measures to reduce tobacco consumption by various segments of the population, particularly young people and the poor.[1] Since high tobacco taxes have a direct impact on production cost and revenue, tobacco companies often argue that price and tac increases will result in higher illicit tobacco consumption instead of leading smokers towards quitting or smoking less.

At the national level, the industry has made several attempts to use the illicit trade argument to oppose tax reform. Since 2017, Vietnamese tobacco control advocates have initiated several tobacco tax reform dialogues with the government. However, the Vietnam Tobacco Association (VTA) often presents false illicit trade arguments to oppose the tobacco tax reform[12]. Specifically, they have argued that the tobacco smuggling rate is extremely high in Vietnam, which causes the government significant revenue losses.[13]

In addition to disseminating fraudulent illicit trade data to delay tobacco tax reform, the tobacco industry itself has been found guilty of the crime of tobacco smuggling. In 2017, the Philippines government led by the Bureau of Internal Revenue (BIR) and the Bureau of Customs (BOC) cracked down on the Mighty Corporation for producing counterfeit tax stamps. Nearly 120 million packs of illicit cigarettes bearing Mighty Corporation brands were impounded by the BIR and BOC in several operations across the country.[14] The company paid PHP 25 billion to the government in what became the largest tax settlement in the country’s history.[15]

Other industry to interfere with tobacco tax policy in the region

Indonesia’s tobacco tax system is considered to be one of the most complex systems in ASEAN since it consists of multiple tax tiers. The complicated system creates wide price gaps and leaves room for the industry to manipulate the system. Although the government raises excise tax rates and minimum retail prices to above the inflation rate every year, simplification of tax system is urgently needed. The government plans to simplify the tax system from 10 tiers in 2018 to five tiers in 2021[16]. In anticipation of these plans, the industry has mobilized pro-tobacco groups such as farmers and consumers (kretek) associations, tobacco industry associations, labor/worker associations, employers’ associations, independent agencies, research institutions, and religious groups to oppose the tax increase simplification of the system by creating public pressure through media channels[17].  In addition, the PMI-sponsored Asia Illicit Tobacco Indicator annual report for Indonesia was conducted by the Economics and Business Research and Development Agency of Gadjah Mada University, presenting the misleading result that the tax system simplification policy will slow down the industry’s production volume and reduce the government’s revenue[18]. 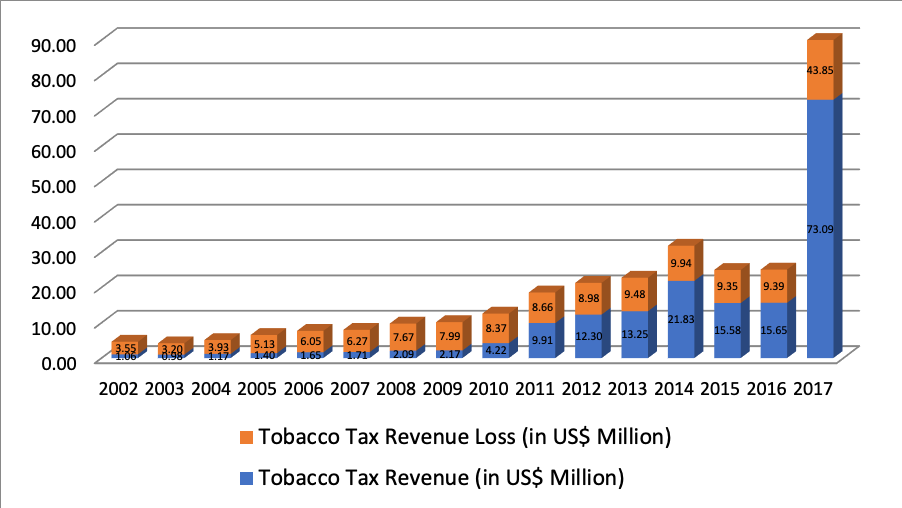 For years, the tobacco industry has done everything possible to circumvent effective tobacco tax policy around the world including in the ASEAN region. The illicit trade argument is one of the most common industry arguments against tobacco tax policy. The industry also uses other tactics to interfere with tobacco tax policy, including mobilization of pro-industry groups, dissemination of false/misleading research data, forcing the government to provide them with preferential tax treatment, and claiming adverse impact as a result of tax policy such as job and revenue losses in their industry. SEATCA recommends that the governments and policymakers around Southeast Asia should protect tobacco tax policies from the vested interest of the tobacco industry by taking into account the World Health Organization Framework Convention on Tobacco Control (WHO FCTC) Article 6 and Article 5.3 and its Guidelines. Governments should also consider becoming Parties to the Protocol to Eliminate Illicit Trade in Tobacco Products, which was adopted during the fifth session of the WHO FCTC Conference of the Parties in 2012. By doing so, the governments will receive assistance and guidelines to create effective measures in enforcing tobacco policy in their countries.