Out of the 10 countries with the highest number of smokers in the world, Indonesia ranks third after China and India.

Ten Countries with the World’s Highest Number of Smokers based on Smoking Prevalence among People Aged >10 Years (million), 2015 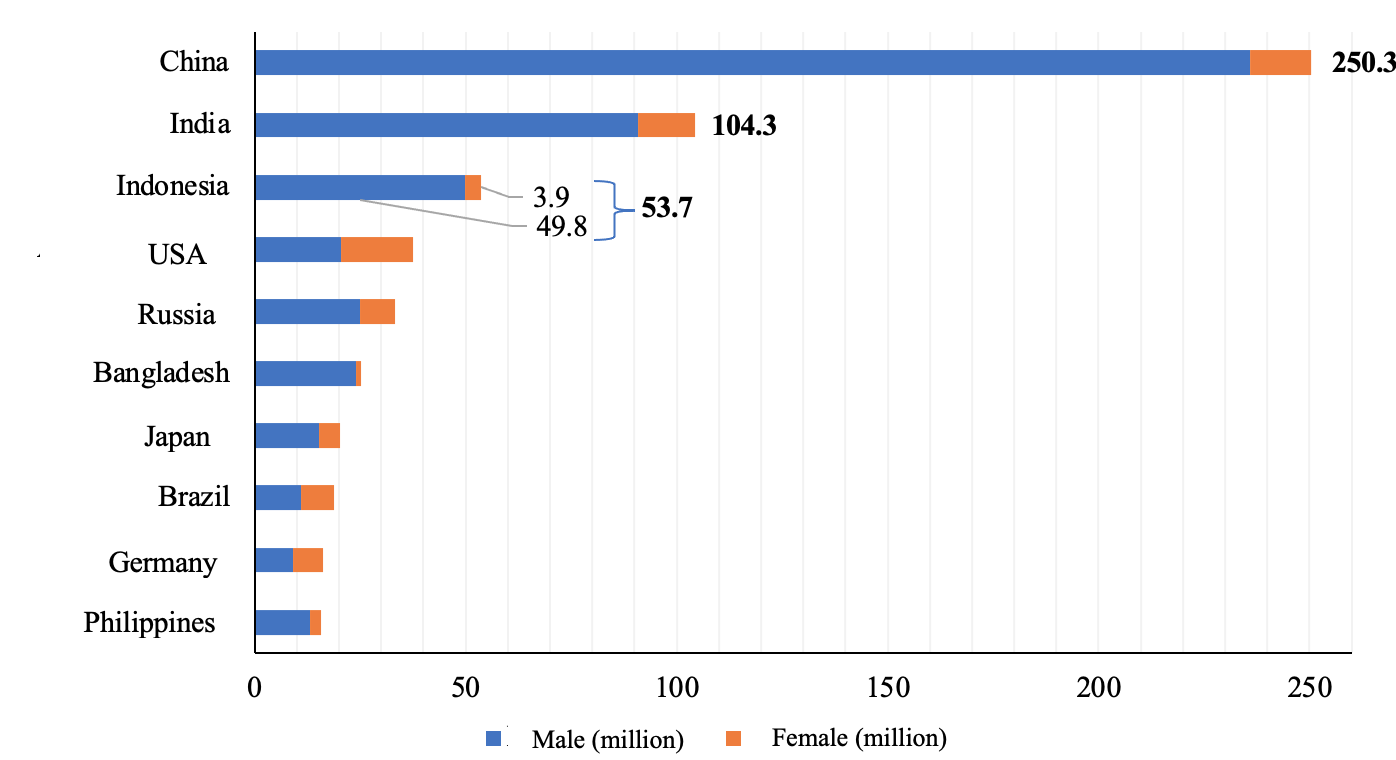 Note: The number of smokers in Indonesia is based on smoking prevalence among people aged >10 years (29.3%) as provided in Basic Health Research (Riskesdas) 2013
Source: The Tobacco Atlas Sixth Edition, 2018 (https://tobaccoatlas.org/topic/prevalence/)

The statistical data on Indonesia as shown in the diagram above is based on the nationwide Riskesdas (Basic Health Survey) in 2013 on smoking prevalence among people aged > 10 years at 29.3%, or 53.7 million smokers in absolute numbers. Meanwhile, smoking prevalence among people aged > 15 years as provided in 2013 Riskesdas is 36.3%, or 64.9 million smokers (further explained in the following figure). 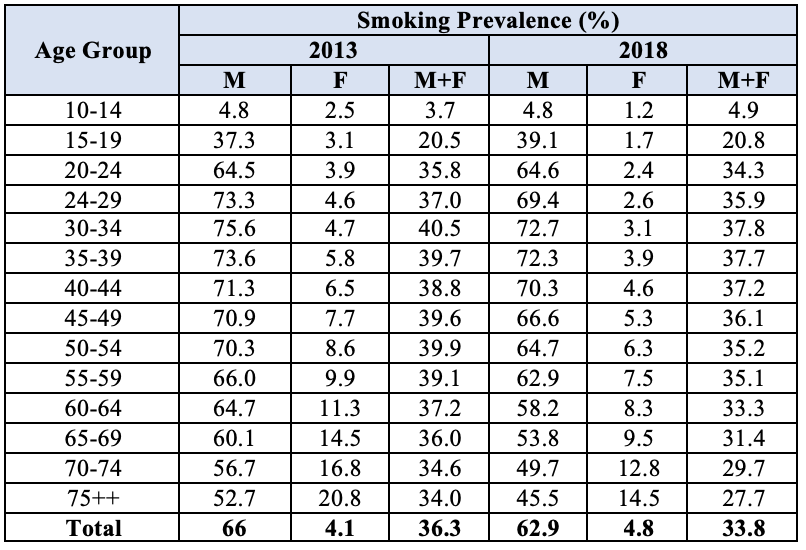 Based on Riskesdas data in 2007-2018, people without a formal education, or who had incomplete or complete primary education consistently had a higher prevalence of tobacco use than those with a university or college degree. Smoking prevalence is correlated with the level of educational attainment. 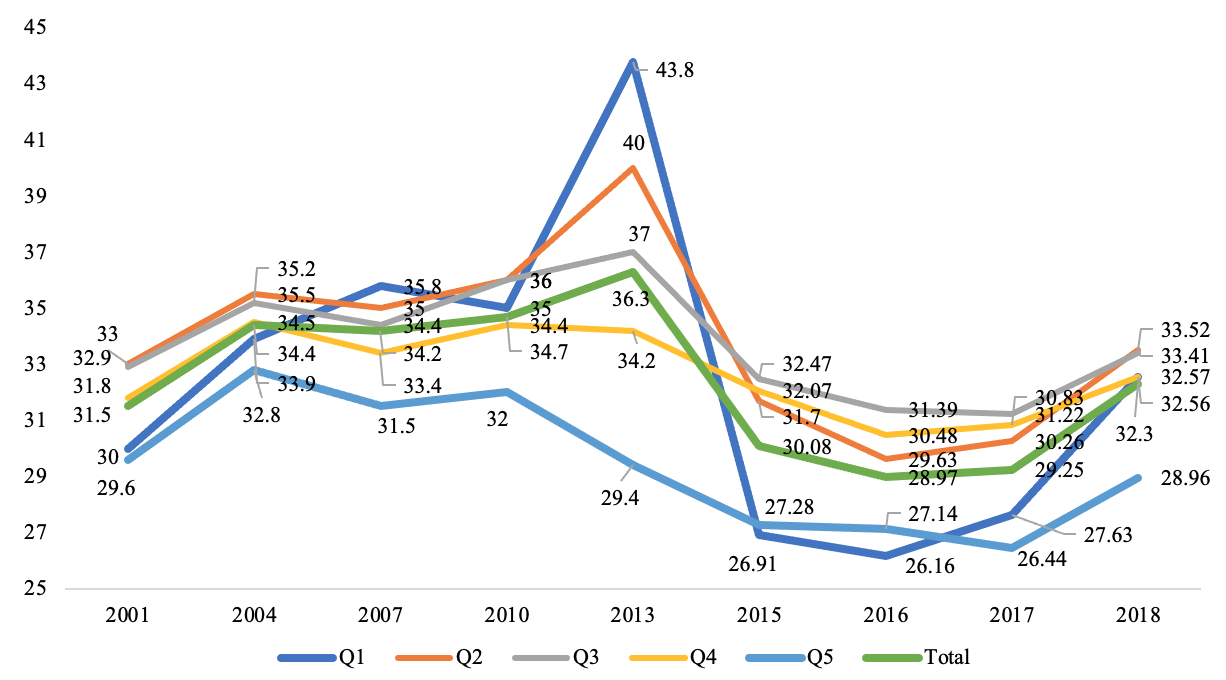 Source: Susenas 2018
Note: the use of comma in the picture indicating the decimal number

The 2018 Riskesdas shows that 77.7% of first-time smokers in Indonesia started smoking before reaching the age of 19. The smoking initiation rate in children aged 5-9 years has increased from 0.1% in 2007 to 2.5% in 2018. There has been a steady rise in smoking initiation rate among children aged 10-14 years. This demonstrates how the tobacco industry has been successful in luring new customers among teenagers.

Source: Riskesdas 2007-2018
Note: Tahun = Years old The use of comma in the picture indicating the decimal number 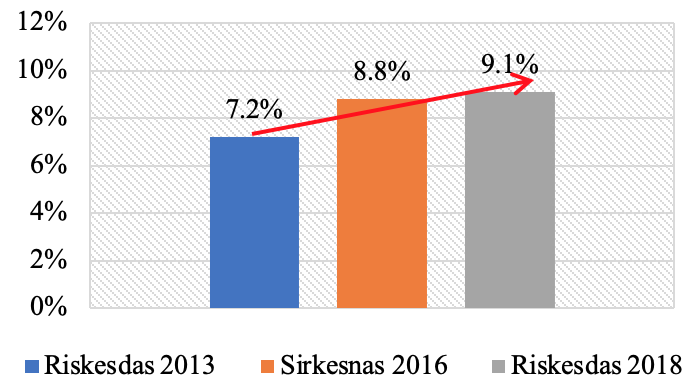 Source: Riskesdas 2018 and Bappenas 2020 Projections
Note: If tobacco control measures are inadequate
The use of comma in the picture indicating the decimal number

Prevalence of E-Cigarette Use among Teenagers Aged 10-18 Years

Smoking prevalence among children aged 13-15 years in Indonesia decreased slightly from 21.2% in 2009 to 18.8% in 2019. However, the absolute number of smokers continued to rise due to the population growth in Indonesia. Teen smokers worldwide, including in Indonesia tend to underestimate the powerful effect of nicotine addiction, thinking that they can quit whenever they want. The 2019 GYTS shows that only 27.8% of teens believed that it will be difficult to quit once they start smoking.

The smoking initiation rate by age group in 2013-2018 shows a shift towards the younger age group in terms of the number of first-time smokers. The table above presents the rising absolute number of beginners aged 10-14 years from 4 million to 5.3 million, while the number of novice smokers aged 15-19 years decreased by 600 thousand from 12.1 million to 11.5 million.

Indonesia with its large population, weak tobacco control policies, low excise rates, cheap labor, and lack of public awareness has made it an attractive market to multinational tobacco companies that now dominate the tobacco market in Indonesia.

The tobacco market in Indonesia is dominated by four large companies, i.e., Philip Morris International (PMI)-HM Sampoerna Tbk, Gudang Garam, Djarum and Bentoel. These companies combined account for 87% of the domestic market share. Sampoerna-Philip Morris alone controls a third of the Indonesian tobacco market at 32.5% in 2019.

In 2012-2016, HM Sampoerna/Philip Morris International (PMI) held the largest slice of the tobacco market in Indonesia.

Note: The use of comma in the picture indicating the decimal number

Source: Fiscal Policy Office, Ministry of Finance of the Republic of Indonesia
Note: The use of comma in the picture indicating the decimal number

Source: Ministry of Finance, Financial Notes and RAPBN for 2012-2017

Source: Ministry of Finance, Republic of Indonesia
Note: The use of comma in the picture indicating the decimal number

Nearly one third (32%) of components that make up machine-made white cigarettes (SPM) are imported tobacco. Out of the three types of cigarettes, SKT uses local components the most (94%), consisting of locally produced tobacco and clove. As it is labor-intensive by nature, the SKT industry usually serves as the basis for determining excise hikes, despite low production due to low demand and modest excise tax revenue.

Share of Local vs. Imported Components by Cigarette Type11

According to data from the Fiscal Policy Office of the Ministry of Finance, there were 1,664 cigarette manufacturers in 2011, but only 770 factories were left in 2018. 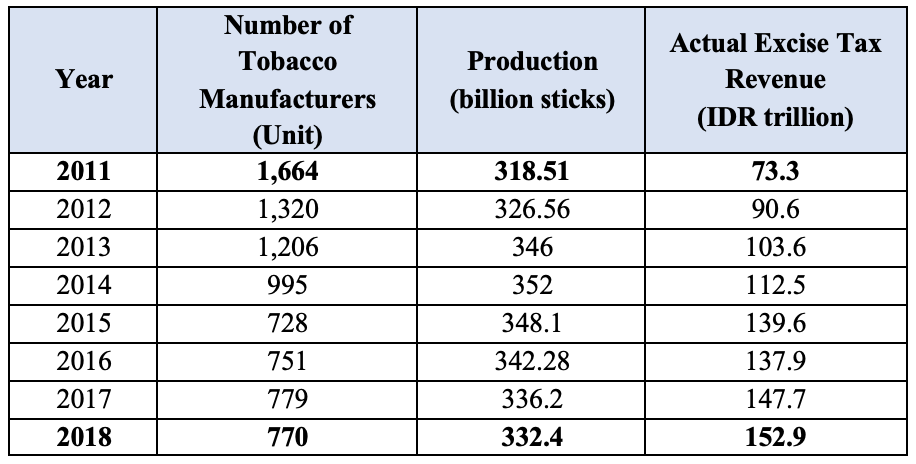 Source: Fiscal Policy Office, Ministry of Finance of the Republic of Indonesia

Although 894 cigarette companies went out of business, excise tax revenues increased doubled from Rp73.3 trillion to Rp152.9 trillion due to an increase in production volume by 4.4%.

Tobacco is a seasonal crop. Land for seasonal farming is called arable land, which is smaller in size compared to total agricultural area. Tobacco acreage as a percentage of arable land also decreased from 1.16% in 1990 to 0.77% in 2017. This indicates that increasingly less arable land is being allocated for tobacco farming.

Tobacco farming in Indonesia can be grouped into two types of tobacco, i.e., Voor-Oogst and Na-Oogst. Voor-Oogst refers to tobacco that is usually grown in the rainy season and harvested in the dry season. Na-Oogst on the other hand is grown in the dry season and harvested in the rainy season. Voor-Oogst tobacco includes the Virginia, Lumajang, white burley and local varieties. Meanwhile, Na-Oogst tobacco includes the Besuki NO and Vorstenlanden varieties. Most of the tobacco grown in Indonesia falls under the Voor-Oogst category. 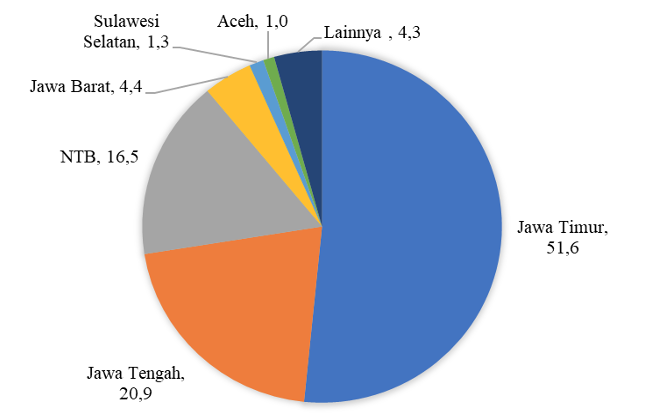 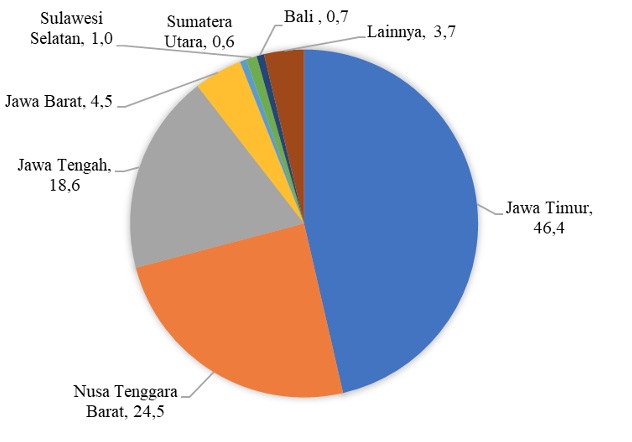